The Sketchbook at the VCA

On a recent  post I mentioned The Sketchbook Project, a project created by the Brooklyn Art Library, New York, where anyone can sign up, create a sketchbook and have it tour throughout the USA. Amazingly, the Brooklyn Art Library decided to visit Australia and show off the thousands of sketchbooks from Australian and New Zealand artists. The Victorian College of the Arts hosted the occasion and it was interesting to see just how the public is able to access the books. 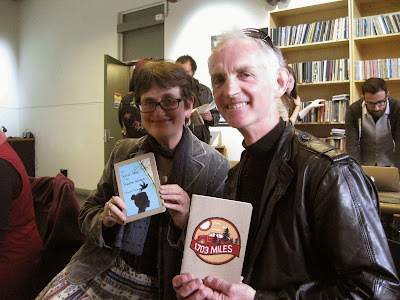 My partner Deborah Klein and I looking over each other's sketchbooks. 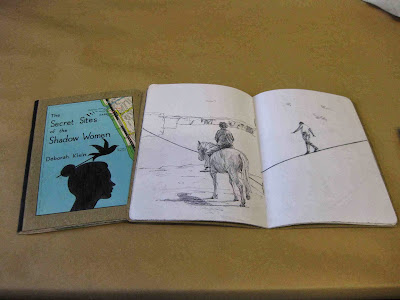 A page from Deborah's book, on the left, and a page from mine. 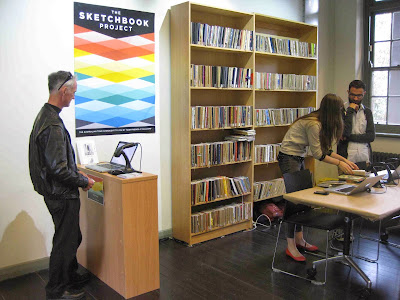 Registering for a library card. This card can now be used anywhere in the world where The Sketchbook Project is touring. 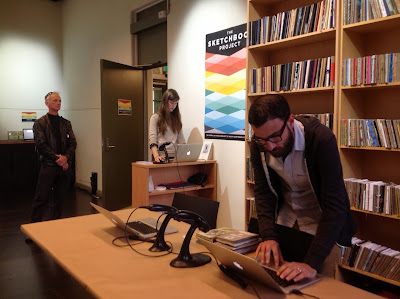 The two young American Librarians, who were so friendly and helpful, but were handicapped by a computer system that habitually stopped working. 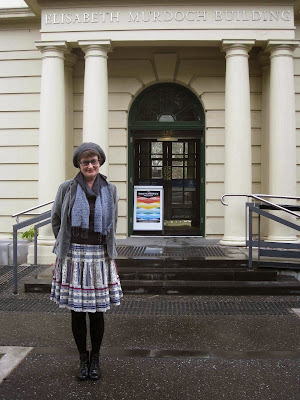 Deborah outside the Victorian College of the Arts building with The Sketchbook Project sign at the door.

Over the Melbourne Cup weekend (2nd and 3rd November) The Art Vault celebrated its 5th anniversary, and what an event it was! Julie and Kevin Chambers, who own and manage The Art Vault, hosted an opening and dinner for well over one hundred people, and the next morning the celebrations continued with brunch on the lawn of their home. They are an incredibly generous couple and have done so much for artists and Australian culture in a relatively short time.

An exhibition of the work of artists who have had a residency at the Art Vault  took up the two gallery spaces.  Sasha Grishin opened the exhibition and a big weekend of talking, eating and drinking followed. Some of the artists stayed on the Chambers' houseboat and on another one they hired for the duration.

The photos below give some indication of the weekend. 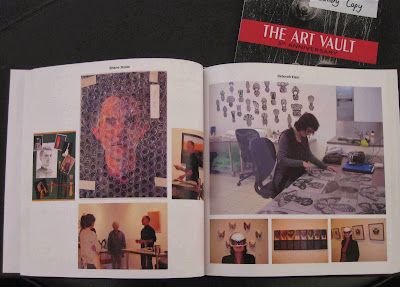 Julie and Kevin have 5 copies of this large hardback book they had made to mark the occasion. Some of the images show the transformation of the building into the Art Vault complex. Other images feature the artists and their work. This double page shows me, and Deborah Klein on the right. 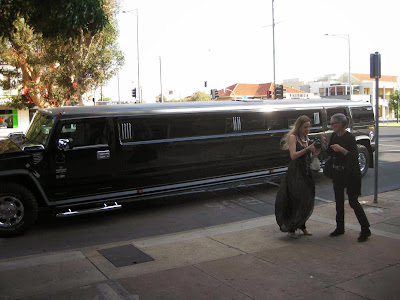 Two limousines collected the artists from the houseboat and delivered them to the Art Vault door. 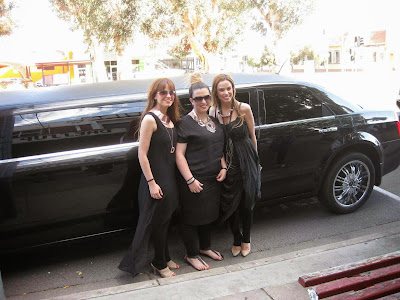 These young women were delightful hosts 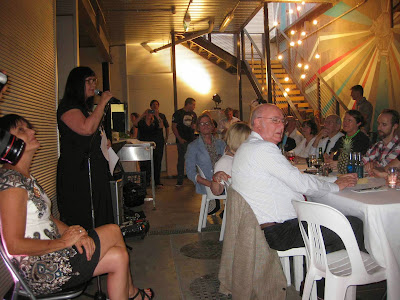 Julie Chambers thanking all the artists, her staff and especially her husband Kevin, seated in white shirt. 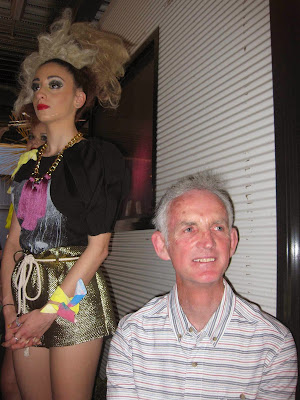 There were 3 usherettes who served at the opening and they dressed in imaginative costumes, reflecting the joy and  theatre of the night 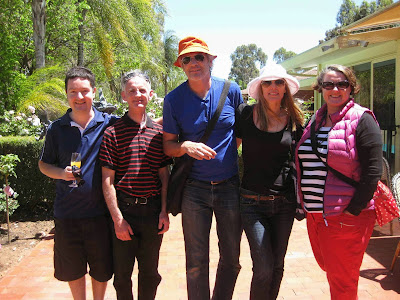 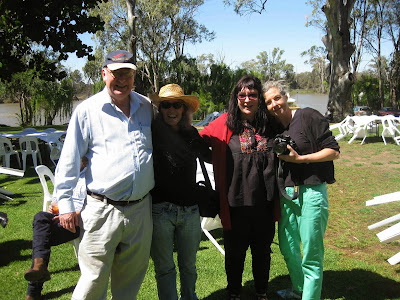 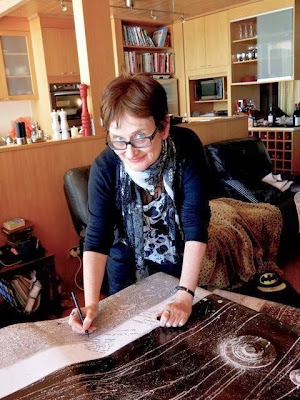 The Art Vault was once a bank, and the old vault doors still remain. There was a life-size reproduction of the door and everyone at brunch signed it. Here is Deborah Klein adding her signature. 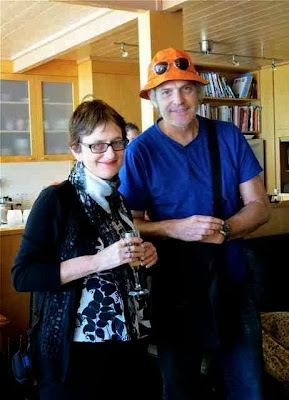 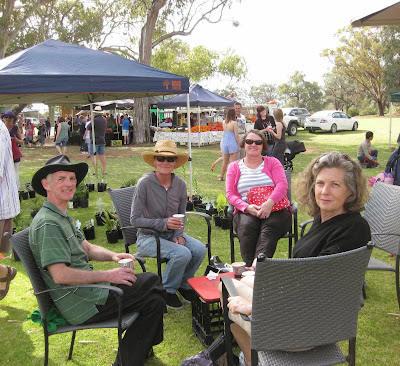 At the farmers market by the Murray. Shane, eX, Stephanie and Ros 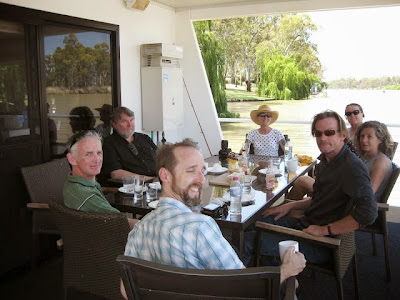 On the houseboat. Clockwise from me - Sasha Grishin, eX, Stephanie, Ros, Martin King and Rod Gray. 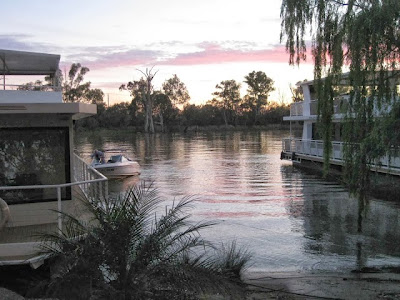 It does look like a postcard, but it really is this good whenever we stay on the houseboat. 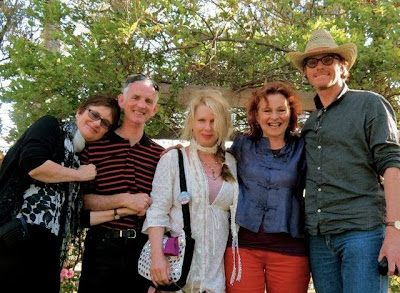 Anne Spudvilas lives on the Murray River, and some of us met her for the first time over the weekend. We visited Anne's house and studio and had a really nice afternoon. Deborah, Shane, Susan Baran, Anne Spudvilas and Martin
Posted by Shane Jones at 1:55 AM