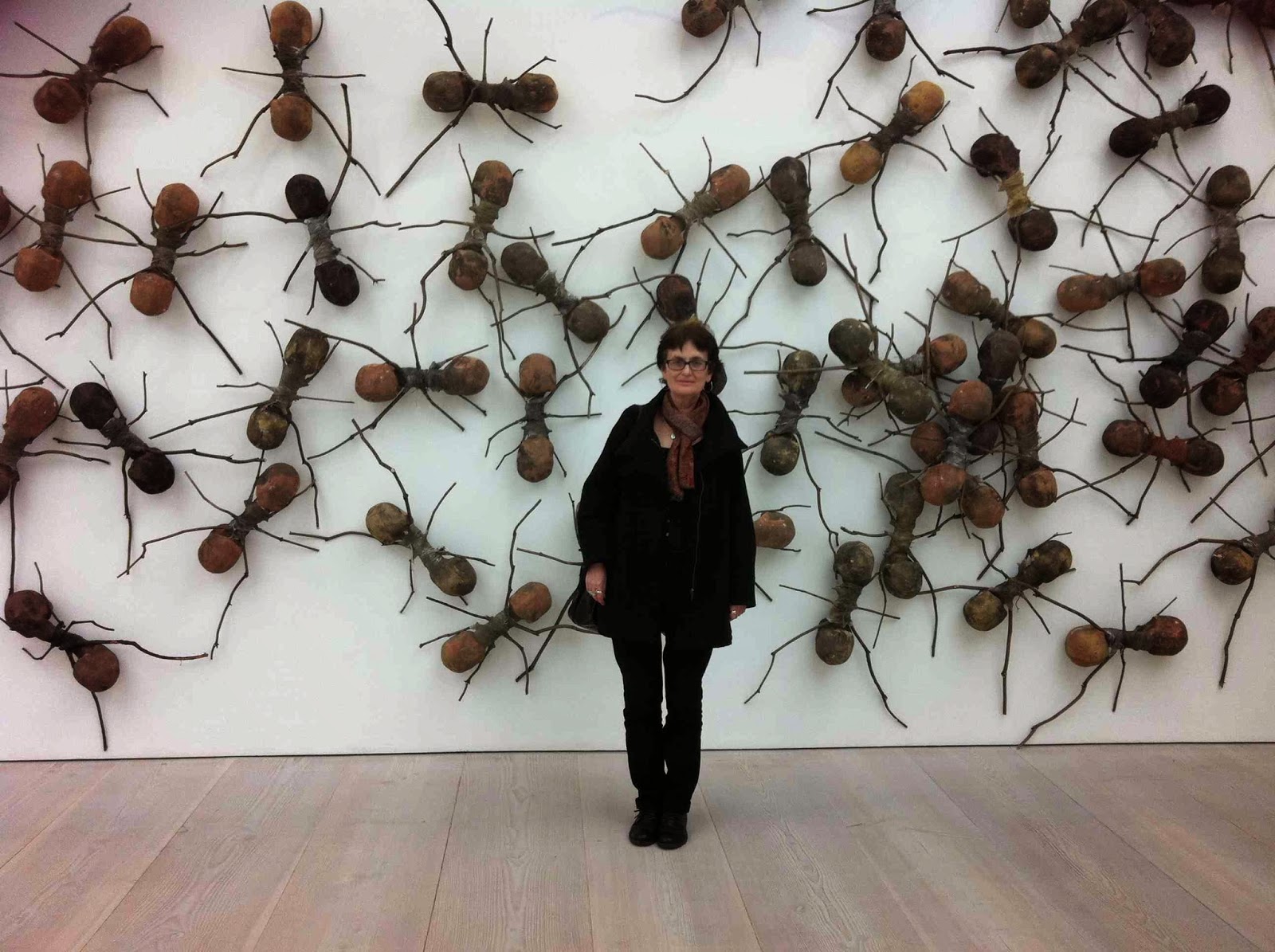 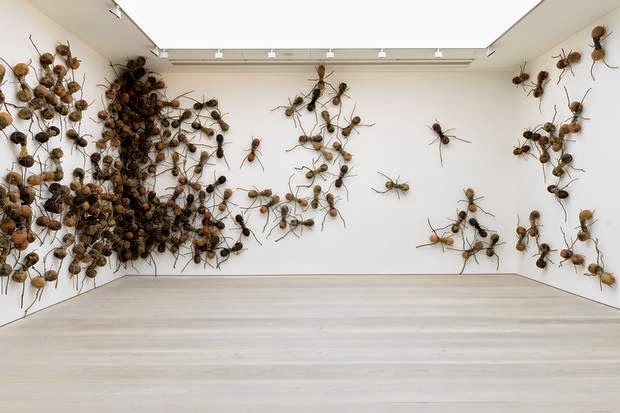 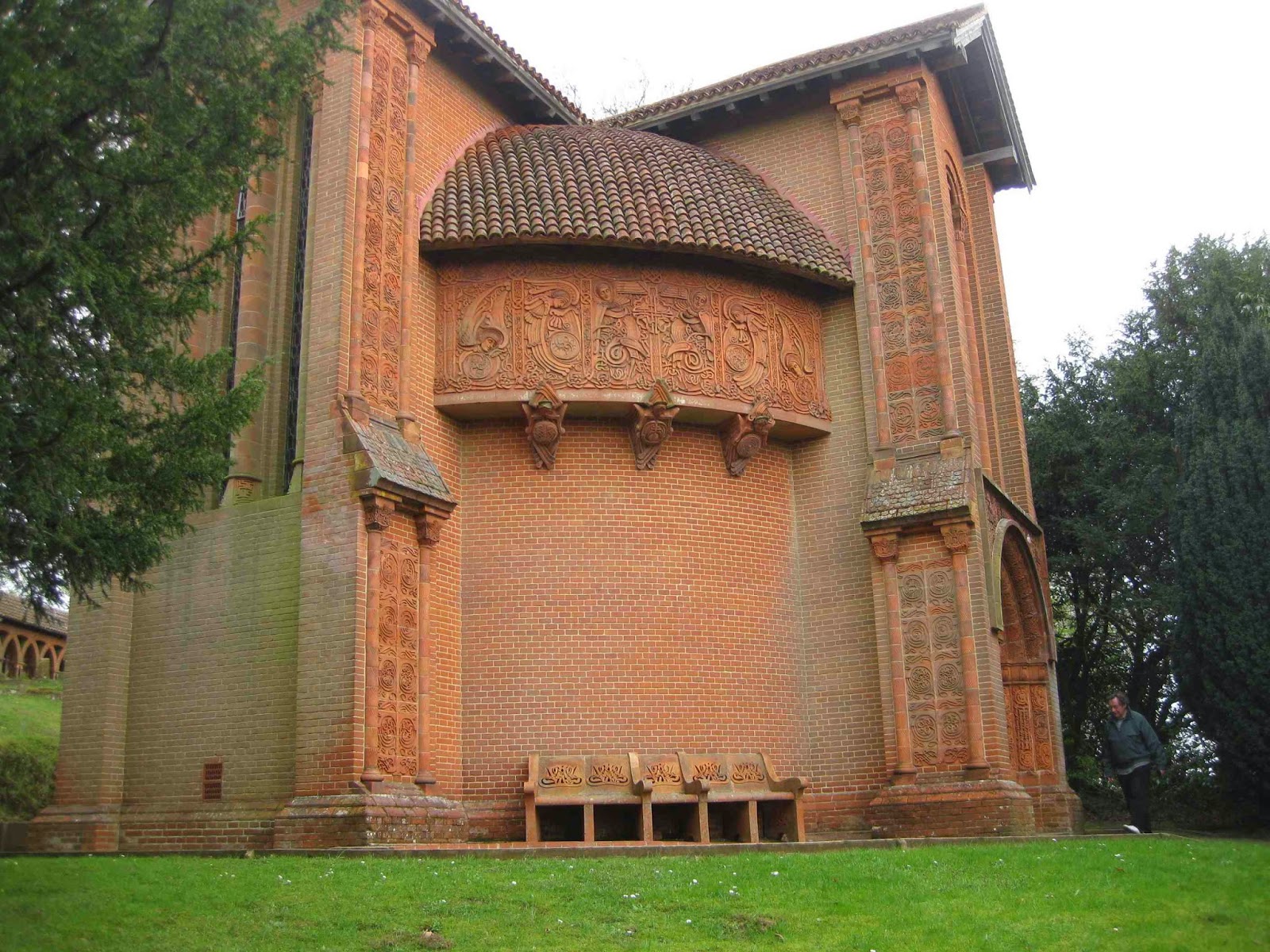 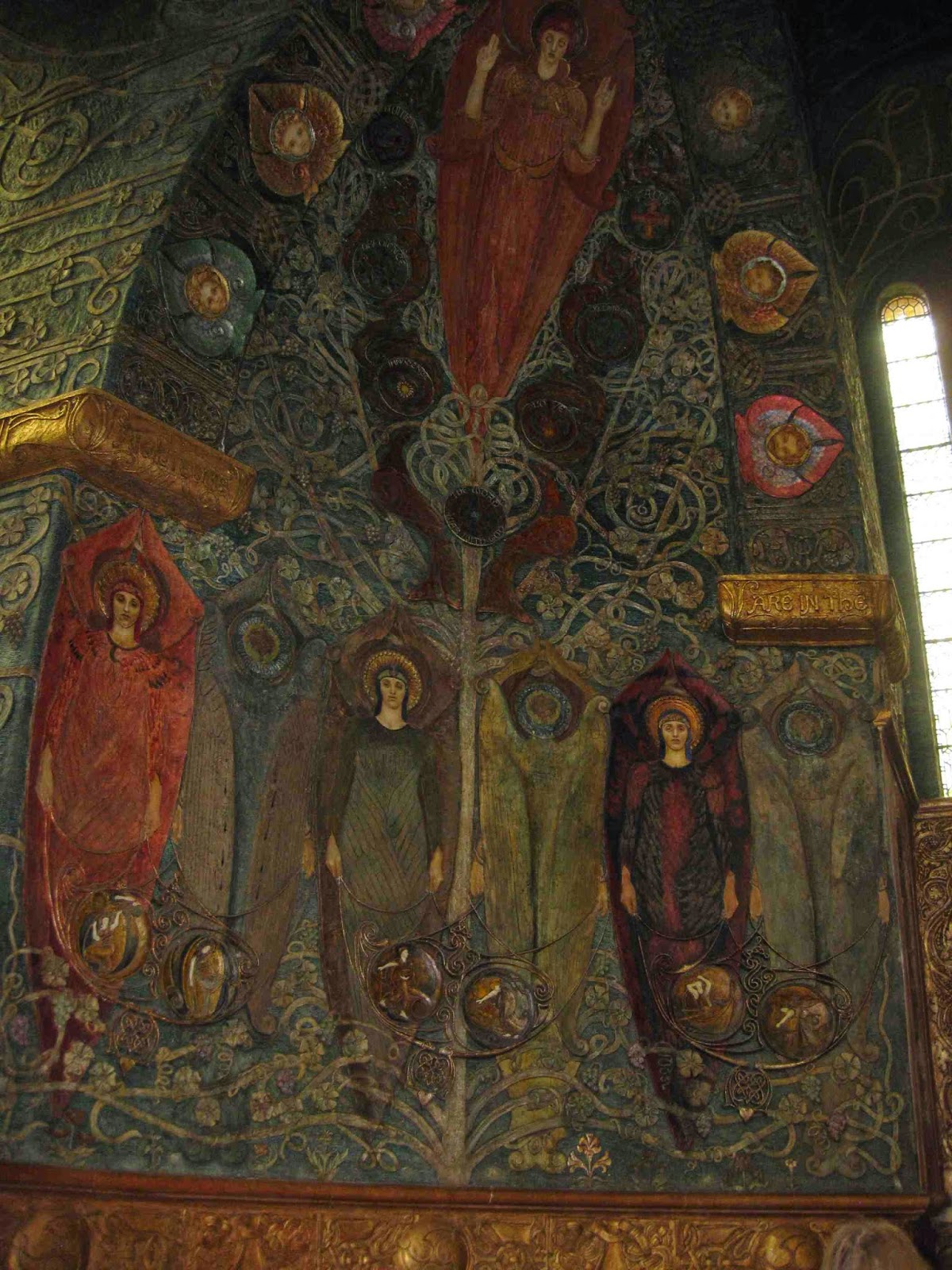 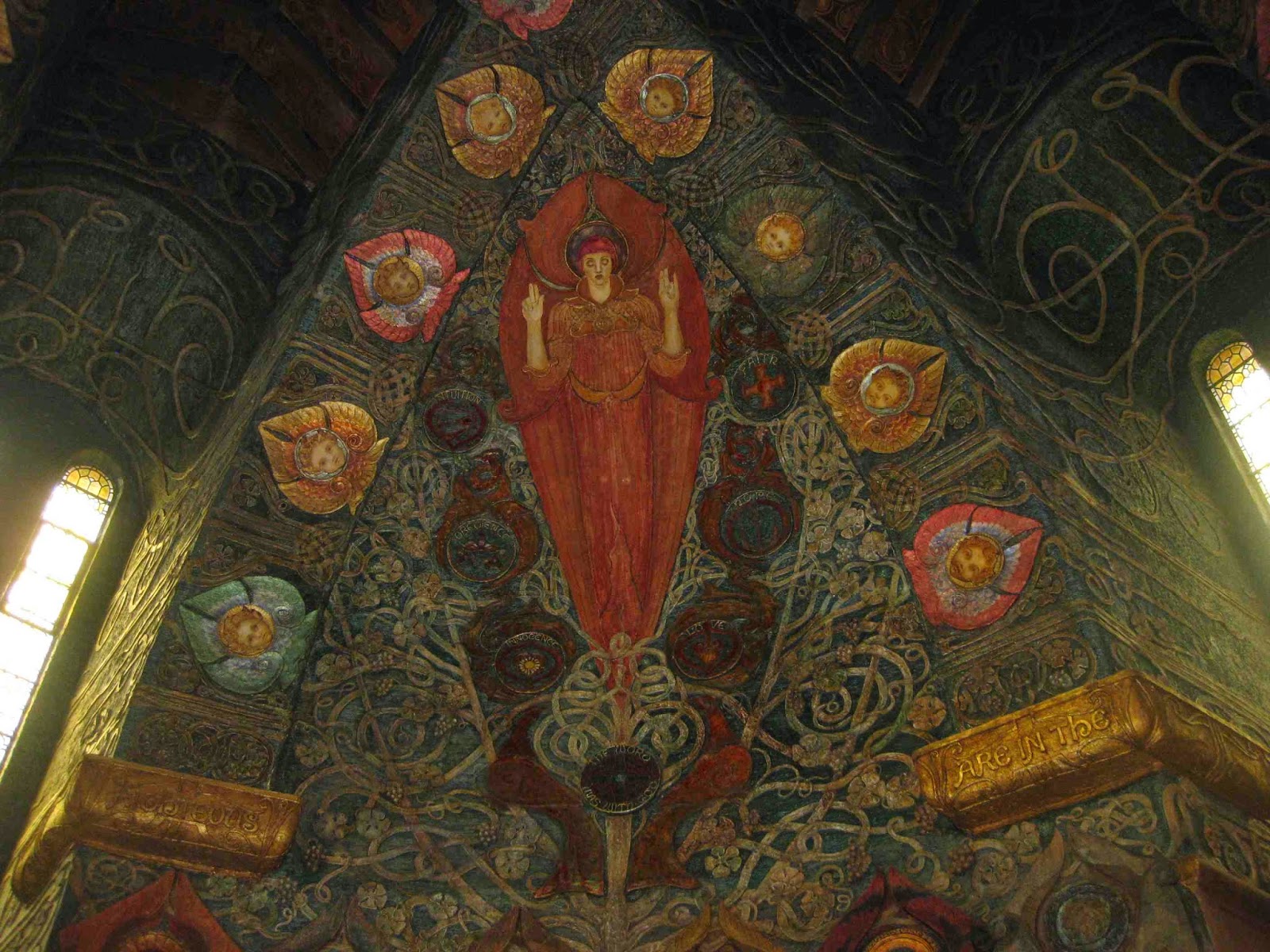 One of the highlights of our recent UK trip was a visit to the Watt's Chapel in the village of Compton in Surrey. It was designed by Mary Fraser-Tytler and she, along with other community members, formed the Compton Potter's Arts Guild and were inspired to build this chapel just near the cemetery. It was a very village affair, with over 70 people working on the construction, but under the close guidance of Mary. It took 2 years to build and was completed in 1898. George Frederick Watts, who was Mary's husband, not only funded the project but created a painting for the altar, titled The All-Pervading. As the photographs show, the influence of art nouveau, Celtic art and Mary's original imagination created a memorial that is truly outstanding.

It was a very grey day when we visited the chapel and the light was poor inside, but even so, it was clear to see what the people of Compton, and in particular, Mary Fraser Tytler achieved. Visit HERE to learn more about the amazing Watt's Chapel.

From Sue's Book of Poems

In this post, I thought I would share some of the poetry of Sue Verney, a musician and writer who lives in London. I thought this selection of work encapsulated satire, wit, humour and visual truth. Thanks Sue!

First the Lindy Hop and then the Jitterbug.
He throws me over his shoulder, as we swing around.
'Gee', he says, 'You're as light as a feather'.
I've never danced like this before.
' Baby,' he says,'You've sure got rhythm for a Lancashire gal'.
Now a slow number and I lean close to his uniform.
I'm glad I wore my red dress,
it makes me feel years older.
He leads me outside into the churchyard.
It's a summer night and the grass
still looks green under the moonlight.
It should show up in the colour film
we're making. I want it to be shown
the world over. I will be a star.
Action shot again: He says,
'Honey, how about we go down to the Blue Lagoon?'
'Oh yes, I reply, 'But that's just a pool.
It's a warm night. We could go on down to the sea.'
'Baby', he says, ' I'll carry you there'.
He lifts me over a gravestone and there is
the dark blue sea and a beautiful little boat.
Full technicolour now. Not yet morning
but the lighting is up to the camera crew.
Now we must act passion and discretion.
I will be so real and grown-up.
'See the little waves', he says.
'I do,' I say. 'And do you feel them, Honey?
Like England. .U.S.A... England... U.S.A.
all the way across the Atlantic?
'Oh yes, Barney,' I say.
'Slowly and gently, Honey', he says.
'Such a peach of a boat, a little British boat,
a cute little puddle jumper'.
I'm insulted!  I can jump more than puddles!
But his voice is so soft and low.

I'm fed up with all this white wedding stuff
Your baby father want pure virgin bride
And you at the altar like big cream puff?
Preacher and all be laughing inside
at you with net curtain over your face;
But showing the baby's no disgrace.
Wear your red dress, and walk in with pride
with that handsome black fella at your side.
Aunty Della will do up your hair.
Honey, you'll be the smartest black pair!
Now come on in and help stir the cake.
The biggest one your Momma can make,
pack full of raisins and best dark rum,
reminding guests of Jamaican sun.

Winston say he wants five tiers high?
Three is enough and you tell him why.
When you both cut it, it must keep stable.
Sky scraper cake will collapse on the table!
I'll finish the icing the day before
and deliver it round to the church hall door.
The rest of the party you want your own way,
so I'll see you both, Darlin, in church on the day.
Winston in grey - and you in whatever..
I'll wear my pink and hat with a feather.

Now Winston's gone booked them a big white car.
White flowers, white linen, that boy'll go far.
Will Rosella take heed and step out in red ?
She has enough guts in her heart and her head.
And I have some mischief to chuckle and plan,
three pounds of black currants to boil in the pan.
When the icing is ready,  I'll pour in the juice
the wonderful taste will be my excuse.
A dark velvet cake on a bright silver stand -
let blackcurrant icing become the new brand!

One in three, and three in one -
but without a woman,
you can't have a son.

Three in one and one in three -
one is neutered and two are He.
Is this mystic misogyny?

In the day it's daffodil time,
in gardens, on the green,
in the shops and stalls.
At night, under the street light,
a bronze fox crosses the road,
his coat glowing as he stops
to consider us. He looks
us straight in the eye,
with his matching yellow eyes.
A dog fox, with a white front.
He grooms himself, unafraid,
then trots quickly off,
to forage rubbish bags,
sniff hutches, hunt on the Heath.
He glides along the pavement,
flagging his fine brush,
which glints of gold. 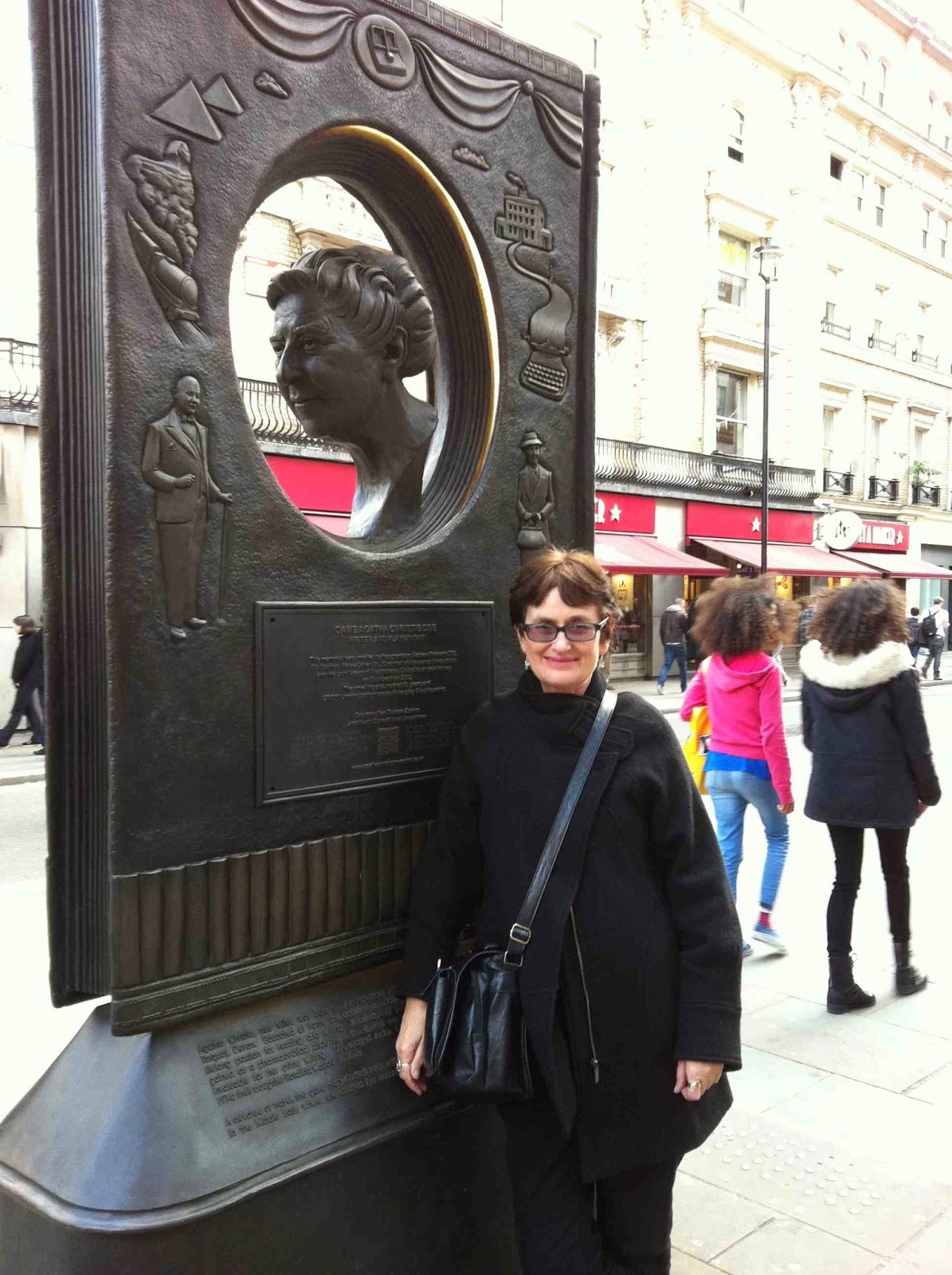 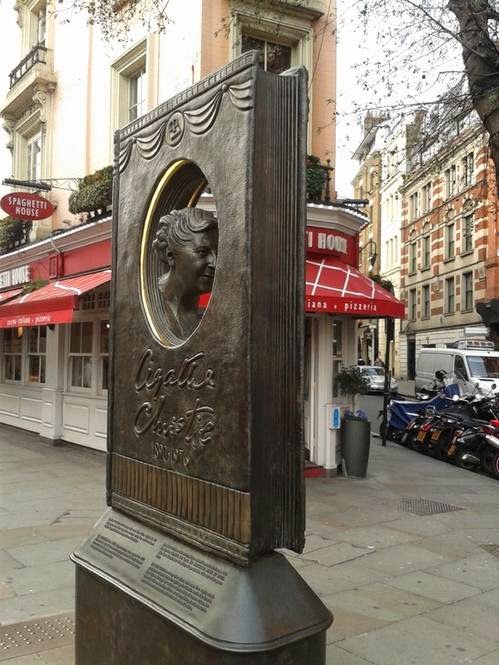 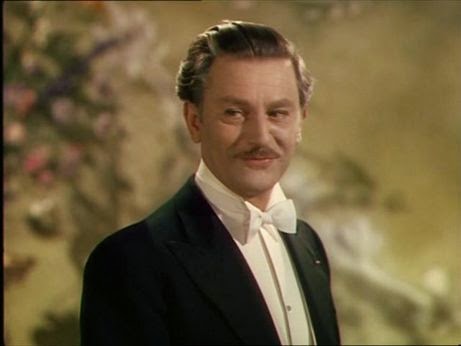 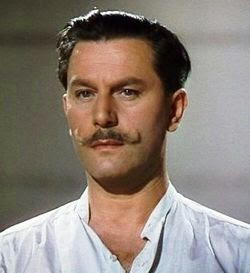