A painting in progress 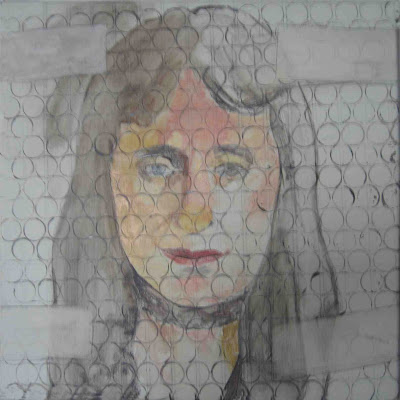 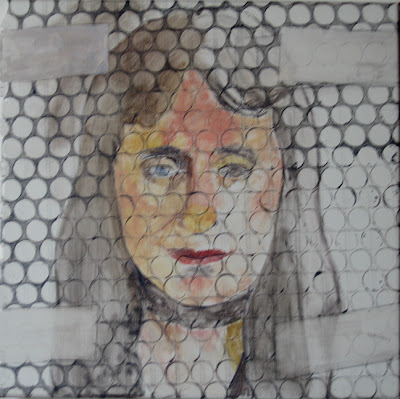 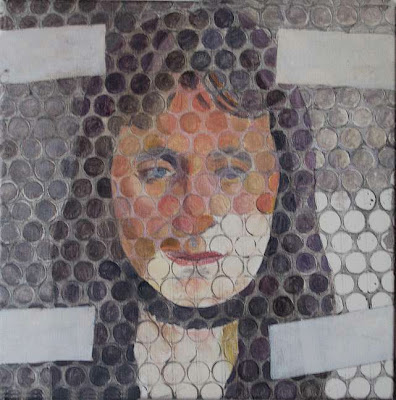 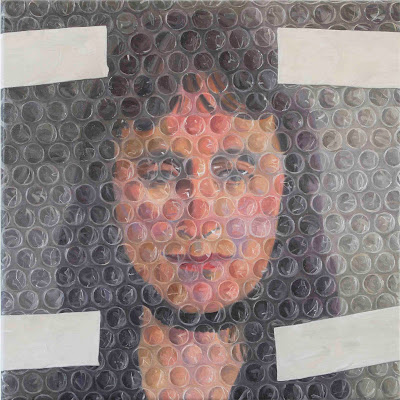 Sometimes I'm asked how I paint bubble wrap, so this is an example of how it's done. This painting, Portrait of Deborah, is a reinterpretation of an earlier portrait of my partner Deborah Klein. The outlines of the face from the earlier portrait are traced onto a new canvas and roughly blocked out with colours. Next I rule up lines in pencil to correspond to the spaces between the bubble wrap circles, then I trace around a metal washer the same size as the circles in the bubble wrap. I place the tape where I want. The ruled circles cover the face in the same position as the circles of the real bubble wrap sit over the face of the earlier portrait. At this stage its planned out in ghost form, with the colours inside and around the circles thinly brushed in. Finally I repaint each circle at a time and when I've covered the canvas I let it dry. If needed, I make adjustments by perhaps darkening an area or adding highlights in strategic places. Every circle in the bubble wrap is like an invented small abstract painting simply because it's visually too complicated to follow.
Portrait of Deborah, 2009, oil on linen, 36 x 36 cm
Posted by Shane Jones at 9:01 PM 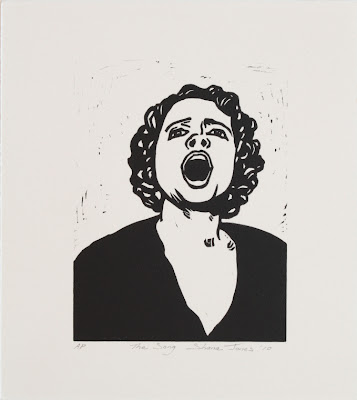 The Song
From 3 Dec 2010 - 12 Feb 2011, the Australian Print Workshop in Fitzroy has an exhibition called IMPRESSIONS 2010. The exhibition is to celebrate the APW's 30th Anniversary in 2011 and to raise funds for its various projects. Every print is a standard size of 20 x 15 cm with an edition of 10 and 2 Artists Proofs, all donated to the APW by the 129 participating artists. The Director of the APW, Anne Virgo, donated the AP/2 of each work to the National Gallery of Australia in Canberra. My print, The Song, is a linocut, and my aim was to make an image about the sound of a song rather than a portrait of a singer.
Posted by Shane Jones at 2:27 PM