Duchamp and His Legacy 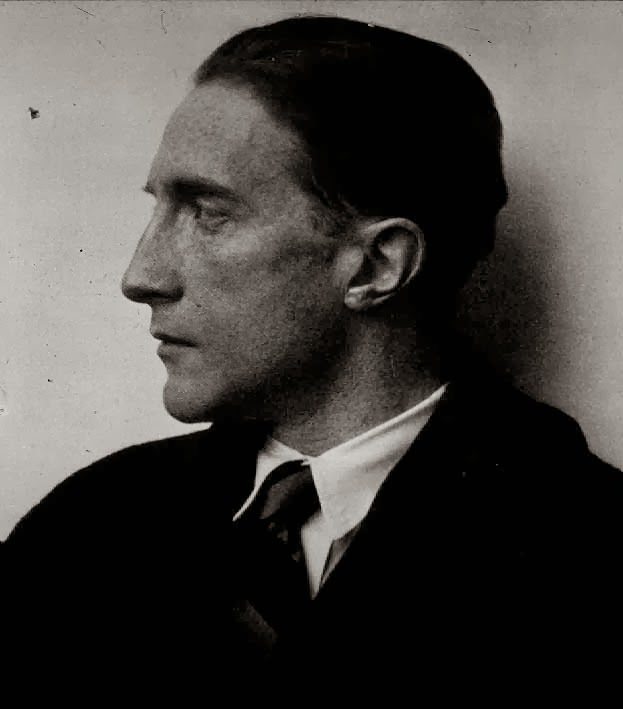 In 2004, a panel of art experts voted Marcel Duchamp the most influential artist of the 20th Century. But was Duchamp a genius, or a person who used objects and words to illustrate certain ideas? “Isn’t that what an artist is?” you might say. But by that definition anyone is an artist, because we all use objects and words to express ourselves.

Why would Duchamp want to question the value of retinal art? By retinal art he meant that which pleases the eye, yet we have centuries of great art that pleases the eye but with intellectual and emotional depth as well, something Duchamp chose to ignore. Duchamp’s early paintings, competent though they are, and the fact that he abandoned painting altogether, suggests that perhaps he realized he would not be the artist he desired to be. Apart from Nude Descending a Staircase, No.2, 1912, his works touched on Impressionism and Modernism but without much exploration or distinction. One could argue that he abandoned painting because he was destined to change the course of art. But in what way?

Duchamp said that art, etymologically, means to do, that art means activity of any kind, and that it is our society that creates purely artificial distinctions of being an artist. By this definition, there is no difference between creating Rembrandt’s The Nightwatch and sweeping the floor. But such distinctions are not artificially created by society, they are a fact. Labour and skill will not create a work of art like The Nightwatch, so what else did Rembrandt put into his labour that elevates it to such a high achievement?

Duchamp proposed the idea that when an object is exhibited out of context a new thought is created for that object, which is art. It is the thought rather than the object that matters. Or as Duchamp put it when he exhibited a urinal:

Whether Mr Mutt made the fountain with his own hands or not has no importance. He CHOSE it. He took an article of life, placed it so that its useful significance disappeared under the new title and point of view - created a new thought for that object. 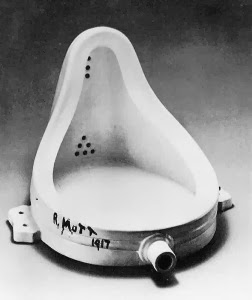 Of course one might look at an object differently when it is presented in an unfamiliar context, but does that make it art? If a Monet painting was exhibited in another context it will not alter or negate the thoughts that are already painted because the art is within its material and is independent of where that material is exhibited.

Duchamp also proposed that the viewer is just as important as the artist when he said:

The creative act is not performed by the artist alone; the spectator brings the work in contact with the external world by deciphering and interpreting its inner qualifications and thus adds his contribution to the creative act.

But a response to a work of art is not the creative act. The art has to be created before it can be responded to. Art has its own presence in the world whether anyone sees it or not. Like trees in a forest, even though we are not looking at them, they are still there. Art is independent of the viewer, that’s why authorship is important, because it’s the artist who brings it into contact with the external world. The viewer can extend the art created by the artist into the world, like a ripple in a lake, but the ripple is different to the stone that caused it.

Duchamp’s viewpoint was a kind of anti-art, opposing everything that defined the art of the past. He said that he was interested in ideas, not merely visual products. The word products suggests commodities, but art is never just a visual product, even though money is associated with it. He opposed aesthetics as a quality that also attracts sales, but he mistook soul qualities for marketing values. What time has taught us is that the market is about desirability, and that anything can be bought and sold if it is desired -  and Duchamp wasn’t spared either. Beginning in 1950, Duchamp started authorizing curators to purchase urinals in his name, like a printmaker editioning proofs. One sold for $1.8 million in 1999. 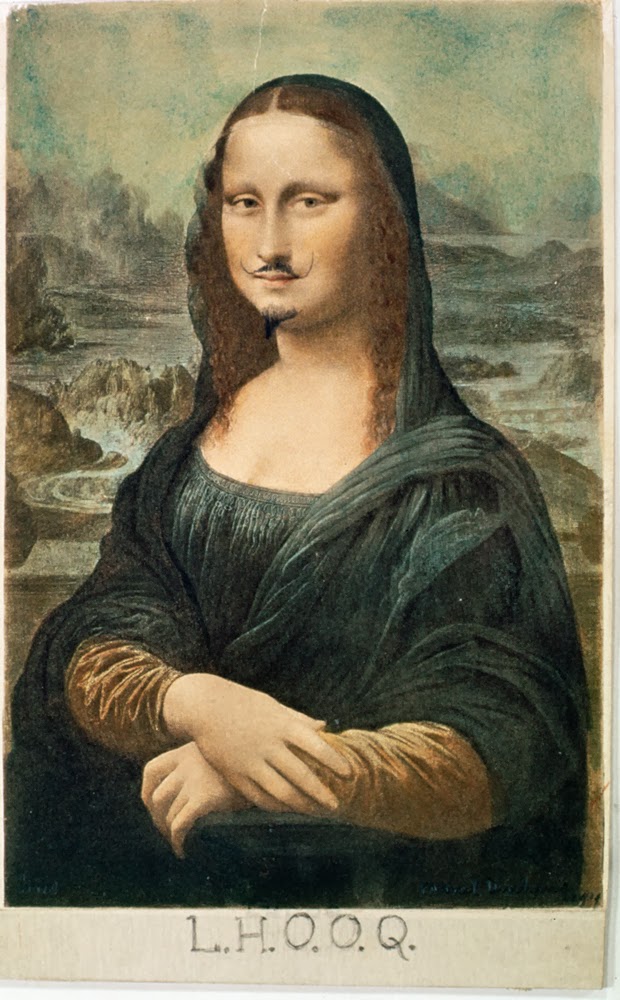 Duchamp also wanted to ‘de-diefy the artist’. His painting, L.H.O.O.Q. 1919, is his visual joke about, as he saw it, the overblown importance of the artist. But when his work Nude Descending a Staircase, No.2 was exhibited at the Armory Show in 1913 in New York, Duchamp became the celebrity artist himself. In fairness to Duchamp, no-one can be a celebrity or make a lot of money unless those around them support and promote them, but it is ironic that Duchamp became the very things he said he opposed. 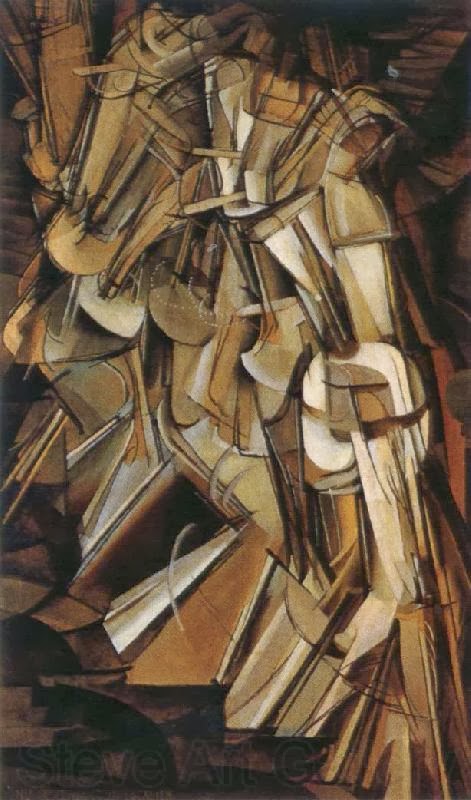 Art created from traditional mediums is often referred to as the art object, but that’s a misconception. Art is thoughts within a material support, which makes it more than its material, identifies it as something more than an object. This misconception has influenced conceptual artists when they claim that the idea is more important than the object. But it doesn’t ring true where we see in so much contemporary art a reliance on huge amounts of materials to support an idea. Sometimes rooms full of it. So much physicality can overwhelm a concept and give prominence to objects rather than the importance of the mind.

Much of the contemporary art we see in Biennales and Triennales is not only Duchamp’s legacy, but is today’s mainstream art, otherwise known as New Media art - that is, any medium that avoids the traditions of painting, drawing and printmaking. New Media sees itself as the avant-garde but calls itself cutting edge. Historically, the avant-garde has always opposed fashionable mainstream art practice, therefore New Media has either inverted history or sees itself as the beginning of a new one. We should also reflect on the fact that Duchamp exhibited his urinal almost a century ago, so his legacy is already a tradition rather than contemporary cutting edge.

Perhaps no other art form has been so undermined by the seduction of words as visual fine art. Sol Le Witt proposed that anyone can draw simply by following his instructions. But his thinking limits those who do follow his instructions to perpetual pattern making. There is a big difference between drawing like Degas and making a pattern. Le Witt said that art is like learning the notes in music and if you can do that then you can make music. But sometimes we hear it said that someone can play the notes and yet they are not that musical – a technician rather than a musician. Drawing, like music, comes from the gods rather than from any text.

Of course, there are wonderful artists who do not use traditional media, like Bill Viola, Hossein Valamanesh and Louise Bourgeois for example, artists who have made magical things. But so much that is celebrated today is a long way from these artists. Before Duchamp, it would be unimaginable to see a person can their own excrement and sell it as art. Since Duchamp, we have seen just that, as Piero Manzoni did in 1961.

Duchamp’s legacy has fostered some amazing artists but the problem is that most conceptual art is on the same level as reality television, where we see so much banality celebrated. The celebration of it is the problem. Camille Pissarro once said that he wanted to make the ordinary into something extraordinary, but today it’s like keeping the ordinary as it is. Grayson Perry made a telling statement when he said:

Duchamp’s viewpoint was primarily a response to the times in which he lived, but they have passed. Perhaps his legacy needs to be looked at with more discernment.

Sue Verney and the Racecourse

Recently I received an email from a great friend of mine in London, Sue Verney. Sue is a musician who plays violin, a poet and short story writer. I felt honoured to receive Sue's poem about one of my racetrack paintings, and I'm just as thrilled to share it with you.

After the silent gas cloud came
the empty racecourse looked the same.
But if not galloped upon or mown
how soon will it be overgrown?
Or without refreshment slake to dust
with shades of bone and sunburnt rust.