A view from Mount Warrenheip

This painting took around a dozen sittings to complete. Fortunately, the canvas size fitted perfectly into the rear of the car. I was also able to tie it to the back seats, which eliminated any problems with the wind. It's a simplified version because my aim was to give a sense of vastness and light more so than the topographical documentation of a place.

I've always admired the distances in an Arthur Streeton painting, combining detail and atmosphere in a miraculous way. Streeton's painting, The Purple Noons Transparent Might, featured below, is one of my favourite paintings. When I first saw it I was astounded because it was as if nature itself reemerged onto the canvas. I still find it hard to believe he did this in two days!

Painting in the open air is a great experience, and a challenge. I was complimented on the painting because it looked so much like a photograph, but I replied that my aim is always to capture nature in miniature, with its aerial movement, rather than the look of an inert photograph. 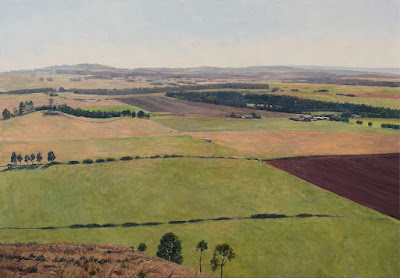 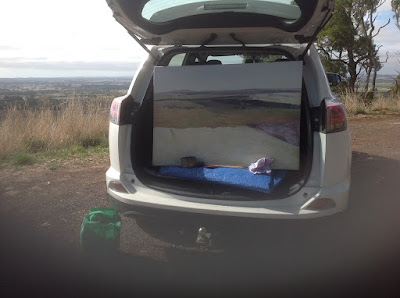 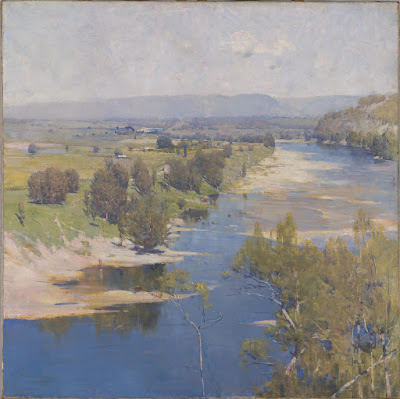 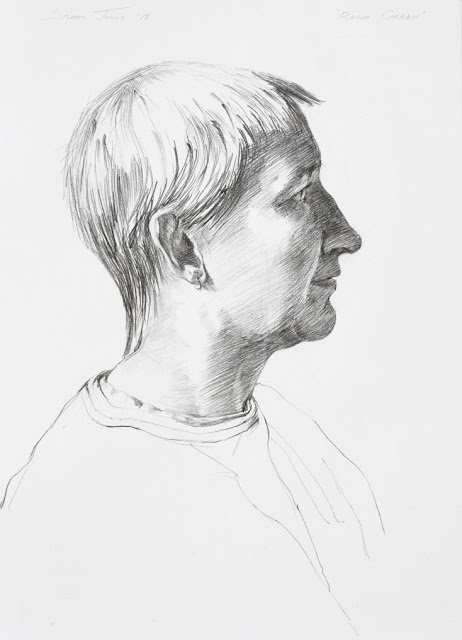 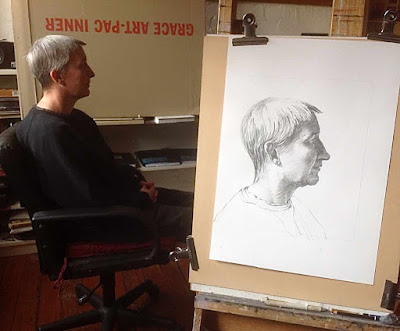 Rona Green is an artist, and her practice embraces both printmaking and painting. But she has another side to her too, and that is, she is a boxer. When I finished this drawing, I thought something of the boxer came through, though if you didn't know this about Rona, you probably couldn't tell. Sometimes we are influenced by what we know of people when we see their portrait.
Posted by Shane Jones at 6:28 PM 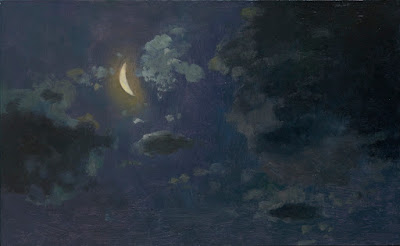 This is a small painting I did directly from life. I painted the moon and its light on the dark night background first, as I often do, wait for it to dry and a week or two later paint the cloud formations. In this way, if the clouds aren't working, it's easier to rub it off and redo a passage instead of repainting the sky as well. Painting on the spot doesn't necessarily mean in one sitting.
Posted by Shane Jones at 6:05 PM

Deborah and I go to the Melbourne International Film Festival every year. Deborah has booked to see 64 films in 16 days! and I've booked 15. We visit the Festival Lounge whenever we can, which is at the Forum on Flinders and Russell Streets. You can get a drink and a snack and talk about what you've seen. This year the Festival Lounge is so streamlined it's a bit bare looking, but the surrounding decor is amazing, and since MIFF only occurs for two and a half weeks during the year, it's still nice to visit there.

So far, my favourite film has been The Eyes of Orson Welles, a documentary about  Welles' drawings and the idea proposed by the film's writer and director, Mark Cousins, that Welles' films are an extension of his love of drawing. Welles wanted to be a painter at an early age, and there are examples of his sketches as a 12 year-old boy. His talent shone mostly in his quick line sketches rather than in painting, and there's something alive within his lines, which is more than manual dexterity.

I don't think it's an exaggeration to say that this film is a love letter from Cousins to Welles in appreciation of his achievements, not only as an artist, but as a humanitarian.

To find out more about Orson Welles, visit IlianFilm.com at and look under the heading film canon. The last three drawings reproduced by permission of ilianFilm 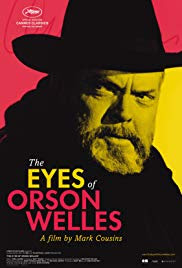 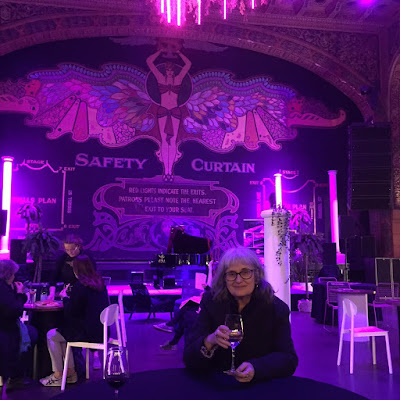 Deborah at the Festival Lounge 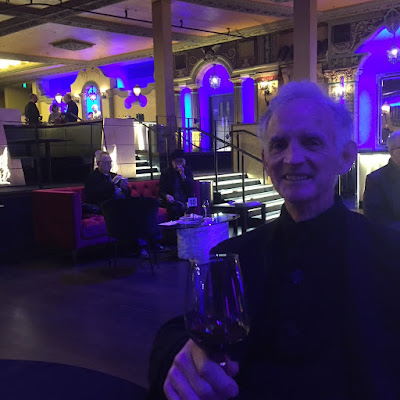 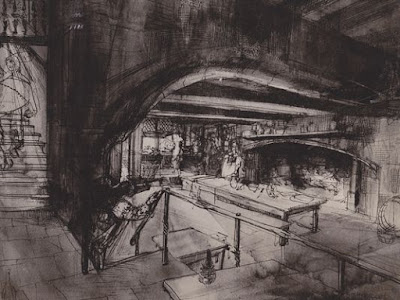 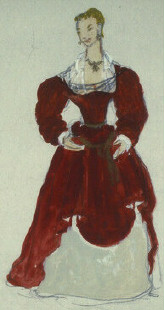 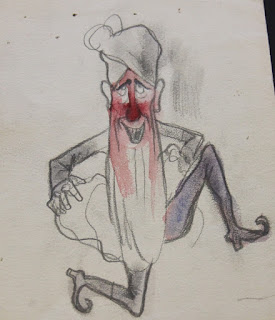 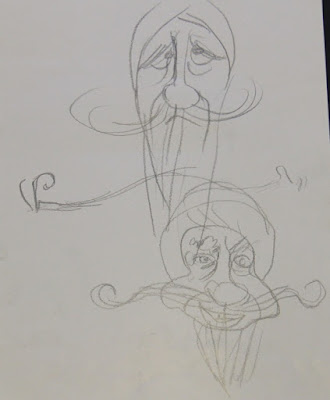 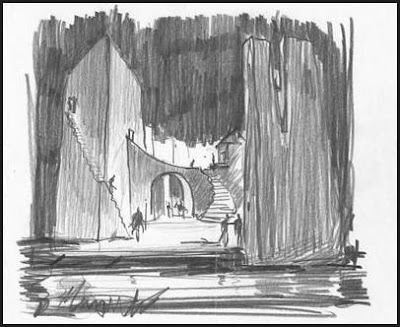 Sketch for the set of Macbeth 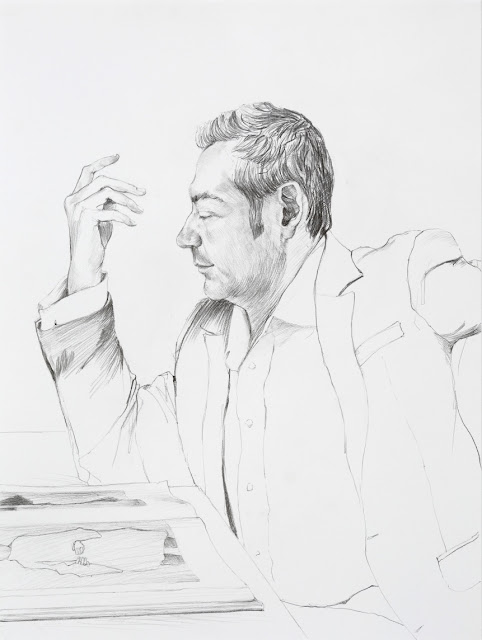 This drawing is more linear than most of the other profile portraits I've done, mainly because the light wasn't very intense the day Eugene sat. The pose itself is so interesting, and it was Eugene who suggested it. I wanted to include the hands in some of my profile portraits so Eugene's pose was just perfect. The photograph of the sitting was done at the end of the sitting, but it shows the work I did when Eugene left. It's rare for me not to do extra work without the sitter, but not too much, or else there is a danger of losing the spirit of the time the portrait was done. 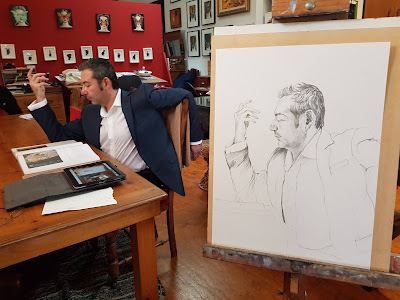