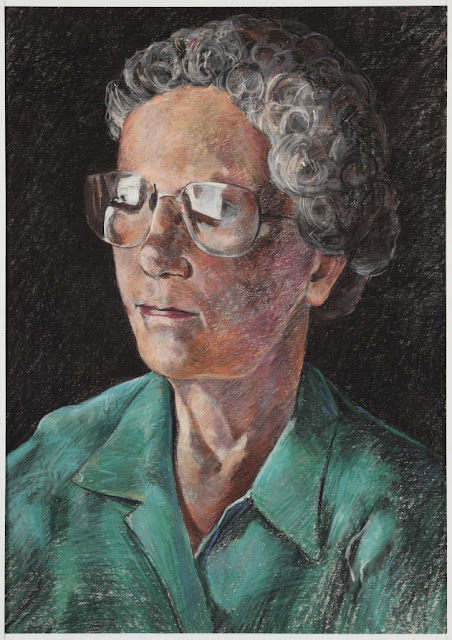 Towards the Light - portrait of Ade Hatfield,
2005, dry pastel,

This portrait pastel drawing was done from an oil painting I did over thirty years ago, mainly because I thought I could redo it better. Generally artists paint from drawings but there are no rules, so whatever suits one's practice is the only imperative. It's rare for me to make an image from another image I've already done, but occasionally I try it out. I changed the dress from yellow to green and introduced a dark back ground. I use more colours in my pastel drawing than I do with my oil painting and apply them with a slightly looser technique.

I found the light reflections on the glasses an interesting accident because I didn't plan the portrait to be that way. But it reminded me of a person who enters the latter part of their life which proposes the question, what comes after when our years have been lived? The title of the drawing Towards the Light suggests there may be more but the fact remains we don't know.

Arrangement in Grey and Black No. 1 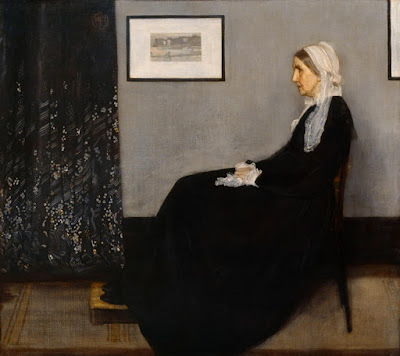 The National Gallery of Victoria has a small exhibition of the work of James McNeil Whistler, and the main attraction is the famous painting of his mother titled Arrangement in Grey and Black No. 1

This is the only Whistler painting in the exhibition but there are a number of his etchings on display and they are magnificent. There are also some paintings by Australian artists who were Whistler's contemporaries, pointing to the fact that his thoughts on art had an undoubted influence on their work.

But the famous painting of his mother is a wonderful achievement. It would have to be one of the most elegant and subtle paintings an artist could create. On close inspection, it reminds me of what the Australian painter Hugh Ramsay said on viewing it, that it seemed 'as if it was thought onto the canvas rather than painted', and it's an excellent observation.

It does look as if it was breathed onto the canvas. The thinness of paint and the way it's applied, like interwoven veils, gives the impression coloured clouds gathered to form an image. But it has structure, which saves the painting from being too ephemeral or lacking a core that grounds it to our world as well.

Whistler was an artist whose character was not transferred to his art. He was a prickly human being who painted the most restrained and serene works. He was very attached to his mother, so this could be a reason he rose to the occasion and painted a portrait that is undoubtedly one of his greatest masterpieces.
Posted by Shane Jones at 1:57 AM