Grayson Perry at the MCA Sydney

Last Sunday Deborah Klein, Paul Compton and I flew to Sydney to view the Grayson Perry exhibition at the Museum of Contemporary Art called My Pretty Little Art Career. 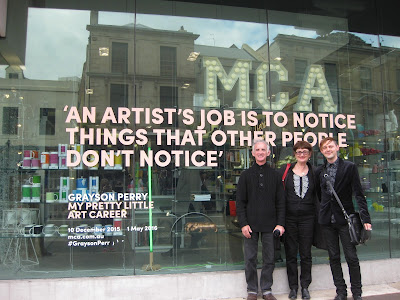 
It was an amazing collection of artworks, including sketchbooks, prints, pottery, sculpture and tapestries. There were three video interviews with Perry, and what comes across is his intelligence and warmth for human beings. As he says, his cross-dressing has given him a tolerance for people and their differences and this comes out in is art.

His imagery is loaded with visual and textual information but it doesn't overwhelm the brain and eye. Instead, it engages one's curiosity, proven by seeing the many onlookers bending forward, deeply interested in what was in front of them. You could spend many hours scrutinising just one work.

His use of words enhances the atmosphere of his imagery, a rare achievement, since text is often used to explain the subject or enhance poor drawing. Perry's text brings forth a sense of the nostalgic and the contemporary at the same time. Using well known commodity brand names, puns, historical references or describing satirical situations, he creates an environment that's easy to enter. He also has a sense of the Medieval and the Renaissance which influences some of his floral patterns and pseudo-animal images.

Perry loves to transform traditional materials into art, and there's a fast motion video called Time Lapse, 2003, which shows him creating one of his pots from scratch to the finished state.

He also talks about his many influences inspired from his museum going, but this also reveals his interest in Art history. He is obviously an artist that sees himself as someone who wants to add a link to the chain of the art that has come before him, rather than someone who doesn't understand its relevance to an artist's development.

There were a number of large tapestries, designed by him in Photoshop but woven through a computer controlled loom program which allows for large tapestries to be made quickly. Although he always uses traditional materials and often traditional processes, the exception is the computer controlled weaving which is not the same as the hand woven, although the finished artwork is an impressive sight. On close inspection, there are a number of layers so I'm not sure just how they were made since a traditional tapestry has only one layer.

But Perry is a maker and a thinker, and his sketchbooks are fascinating as it allows one to look over his shoulder and watch his ideas take their first steps as art. He has a graphic art and design sensibility, and a lot of his work looks like large scale illustrations, but his drawing is a strength and along with his amazing compositions, these qualities have enabled Grayson Perry to make many memorable images. 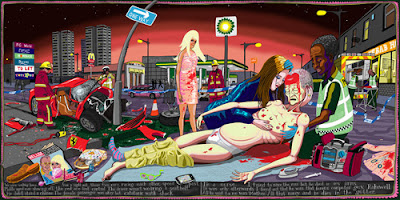 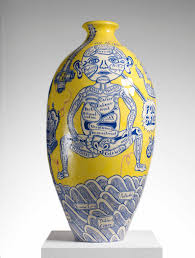