In the Gallery ... with Deborah Klein and Shane Jones

Earlier this year Deborah and myself were interviewed by Amanda McGraw for the Autumn issue of the Ballarat Art Gallery Association magazine. We were taped in conversation and the article is the edited version. 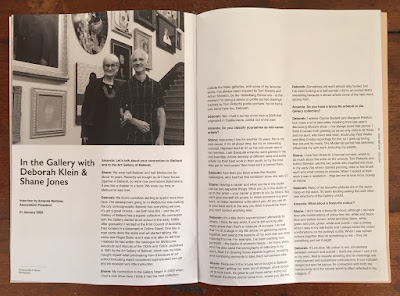 In the Gallery with ... Deborah Klein and Shane Jones
Interview by Amanda McGraw
21 January 2020

Amanda: Let’s talk about your connection to Ballarat and to the Art Gallery.
Shane: We were half-Ballarat and half-Melbourne for about 10 years. Recently we bought an Art Deco house together in Ballarat, so we’re now permanent Ballaratians. It was like a chapter in a book. We knew our time in Melbourne was over.
Deborah: We found ourselves starting to spend more time here. The development going on in Melbourne was making the city unrecognisable. Ballarat has everything we love. It’s got a great cinema – we both love film – and the Art Gallery of Ballarat has a superb collection. My connection with the Gallery started at art school in the early 1980s. After graduation, I worked at the Print Council of Australia, then located in a basement in Collins Street. One day a man came down the stairs and we started talking. His name was Roger Butler and it was only after he left that I realised he had written the catalogue for Melbourne woodcuts and linocuts of the 1920s and 1930s, published in 1981 by the Art Gallery of Ballarat, which was my bible. I taught myself relief printmaking from it because at art school linocutting wasn’t considered sophisticated enough and we received very little instruction.
Shane: My connection to the Gallery began in 2009 when I had a solo show here. I think it has the best collection outside the State galleries, with some of my favourite works. I’ve always been inspired by Tom Roberts and Arthur Streeton, by the Heidelberg School era – at the moment I’m doing a series of profile portrait drawings inspired by Tom Roberts’s profile portraits. You’ve had a solo show here too, Deborah.
Deborah: Yes, I had a survey show here in 2008 that originated in Castlemaine, called Out of the Past.
Amanda: Do you classify yourselves as mid-career artists?
Shane: Assuming I live for another 20 years, this is my mid-career, if it’s all about time, but it’s an interesting concept. Raphael died at 37, so his mid-career was in his twenties. Late Basquiat artworks were painted in his mid-twenties. Artists develop at different rates and some artists do their best work in their youth, so by the time they get to ‘mid-career’ their best work is behind them.
Deborah: And then you have artists like Rosalie Gascoigne, who had her first exhibition when she was 57.
Shane: Having a career and what you do in the studio can be two separate things. What you do in the studio is up to the artist – your career is given to you by others. You can’t give yourself art prizes, or make someone buy your work, or make reviewers write about you. All you can do is your best work in the way you think it should be done – you can’t control anything else.
Deborah: It’s a title that’s superimposed afterwards by others. I think for any artist, if you’re still working after many years then that’s a measure of success. I do feel that I’m at a stage in my life where I’m gathering pieces together and seeing the aspects of my work that are most important to me. For example, I’ve been painting ‘non-portraits’ – the backs of women’s heads – for many years, and I’ve also used the iconography of tattooing in my work. Now I’m drawing those aspects together, revisiting and combining elements to take them somewhere else.
Shane: Because of this house we’ve bought in Ballarat we’ve been getting our work out of storage, which forces us to look back. It’s great to put those earlier works out because it’s where you’ve come from, where you started.
Deborah: Sometimes old work should stay buried, but I’ve been looking at a self-portrait I did in art school that’s interesting because it shows where some of the later work sprang from.
Amanda: Do you have a favourite artwork in the Gallery collection?
Deborah: I admire Clarice Beckett and Margaret Preston, but I have a lot of favourites. Anything from last year’s Becoming Modern show – I’ve always loved that period. I think it comes from growing up as an only child in St Kilda and my aunt, who lived next door, would play Fats Waller and Bing Crosby recordings for me, so I grew up loving that era and its music. The Modernist period has definitely influenced my own work, including my palette.
Shane: I love Tom Roberts’ Charcoal Burners, which is as much about the artist as the artwork. Tom Roberts and Arthur Streeton are the two artists who inspired me most in my early 20s when I started painting, even to the brush work and what colours to choose. When I looked at their work it was a revelation – they led me to look more closely at nature.
Deborah: Many of my favourite pictures are in the salon hang on the stairs. It’s been exciting seeing this and other new directions of the Gallery unfold.
Amanda: What about a favourite colour?
Shane: I don’t have a favourite colour, although I do have favourite combinations of colour like red, white and black; blue and yellow; brown, white and blue; black, white, green and pink; green, white and purple. I was a jockey when I was in my late teens and I always loved the colour combinations on the jockeys’ outfits. When I see certain colours together they do something to me – they stir something and set it alight.
Deborah: It’s intuitive. My colour is red, somewhere between crimson and scarlet – that’s the colour I use a lot in my work. Red is visually arresting and its meanings are many-layered and sometimes contradictory. It can indicate danger but also be joyous. Its connection with both the human body and the natural world is often reflected in my imagery.
Posted by Shane Jones at 7:53 PM