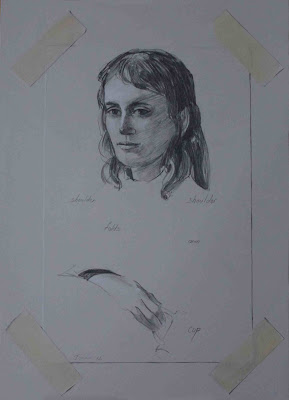 I am in a drawing exhibition called Contemporary Australian Drawing 2: Drawing as notation, text and discovery to be held at the University of the Arts London from 23 March - 5 April. It is also a collaborative exhibition with RMIT and will be held for the Drawing Out Conference at UAL. Dr. Irene Barberis is the curator for the Australian artists represented in this show.

'All Writing is Drawing' and 'The Space of Writing; what does this mean?'


Sometimes I think the art of drawing is often misinterpreted. Drawing and writing each create spaces that allow for the existence of pictures. Words awaken a space that exists only in the mind whereas drawing extends a space onto the paper. Drawing is often thought to be about making marks but it's really about making spaces. Although words make marks, the marks do not create pictorial space on the page and if the words are not understood, then imaginative space will not open within the mind and the words remain just patterns. A blind person can picture what is being read but a drawing will be of no visual value whatsoever.

Text can be an addition to a drawing and reinforce the memory of the artist, but since the different spaces of drawing and writing are achieved in different ways, it means they are not the same thing.

Although my drawing has text, it does not reinforce the drawing visually and doesn't really compensate for the parts that are missing.

We live in an art world where there is a lot of breaking down of barriers, but we need barriers because they define what we are trying to achieve. If a specific game of sport was now deemed to have no rules, then it would lose its meaning. Anything goes doesn't work, and it's the same for all pursuits.