association and the Art Gallery of Ballarat


The Art Gallery of Ballarat publishes a quarterly magazine called association. In this summer's edition I had one of my paintings, Long Shadows at the Ballarat Turf Club featured on the cover. The Gallery recently acquired this painting and another one, Ballarat Turf Club Racecourse which featured inside the magazine together with an essay by Dr. Loris Button.

Here is the association article: 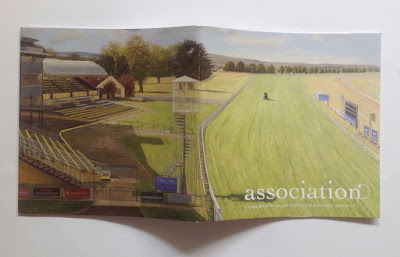 The two paintings discussed in this issue of association form part of a larger body of work produced by Shane Jones over the past three years. The Gallery has been fortunate in acquiring these two works - one as a purchase, the other a generous donation by the artist - from a recent series of racecourse paintings. This series demonstrates Jones's deep engagement with ideas that have been evident throughout his career, but are also reflective of his long fascination with horse racing.

Jones, who was born in Melbourne in 1955, grew up in Mordialloc near the Epsom racecourse, and from a young age spent many hours at nearby stables. By the age of seventeen he was an apprentice jockey. Eventually, releasing that he would never be as good as his childhood hero Roy Higgins, he began to pursue a career in art.

He commenced his formal art training relatively late in life, but quickly made up for that by studying at RMIT and Monash Universities, completing a Bachelor of Fine Arts in Painting, an Honours degree and a Master of Fine Arts degree within eight years. Study tours to other parts of the world form a regular part of his working life, and the information and inspiration he gathers from the experience of looking at original works of art is critical to the way in which he pursues his practice.

His direct experience of riding thoroughbred horses, and of daily life at the racetrack, has provided him with insights and knowledge not available to most other artists who have chosen to depict the racing world. French artists Edgar Degas, Edouard Manet and Raoul Dufy all fall into this category, as does Australian artist Robert Dickerson, who, whilst he owned racehorses and enjoyed spending time with stable hands, admitted he was scared of horses and had never ridden one. (1)

Jones regularly exhibits in both solo and group exhibitions. Our new acquisitions are drawn from his most recent solo exhibition This Sporting Life, shown at Charles Nodrum Gallery in Richmond and at the Art Vault in Mildura in 2014.

The two paintings the Gallery has acquired were mostly painted at Ballarat's Dowling Forest racecourse. Long Shadows at Ballarat Turf Club is a morning picture viewed from the steward's tower and Ballarat Turf Club Racecourse is an afternoon picture viewed from the grandstand. Jones explains that he would work on one painting for a number of hours and when the sun shifted too much, he would swap positions and continue working on the other. The steward's tower was very tight for space, so he had to face away from what he was painting. Each picture took around fifteen sittings on site, with the fencing and rails completed later in the studio. A large panoramic painting from the series, Flemington Racecourse from the Old Grandstand, which is over two metres wide, took forty sittings to complete.

You might ask why anyone would choose to work 'on site' under often difficult conditions for such extended periods of time, when photography offers a viable, and some might suggest, a much less troublesome alternative method? In part the answer lies below when Shane says that:

I've always admired Impressionism and the Heidelberg School and their pursuit of en plain air painting, and the Naturalism of seventeenth century Dutch painting is always an inspiration. Although the location off the paintings is the Ballarat racecourse, the other subject matter is air and light - the combination of the particular (the racecourse) and the universal (air and light) (2)

He goes on to say:

I've always been intrigued by vacant constructed spaces. An empty racecourse has a history     embedded in the atmosphere. We often hear it said that a particular location has a vibe, and I think that's true. Also, the lack of distracting activity can stimulate one's imagination to picture what might happen in the future, so the space of a place can effect, or relate, to one's imagination - which is also a space. All the empty racetrack paintings were mostly done on the spot, because it was physically possible to do this. There is also a great saying by the French painter Eugene Boudin (1824-98) and it has always meant a lot to me: "Everything that is painted directly and on the spot has always a strength, a power, a vivacity of touch which one cannot recover in the studio" (3) 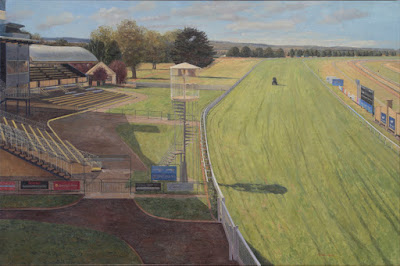 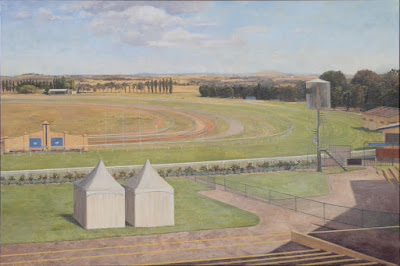 But this is not the whole story for this artist - he also  works from photographic sources, and in some of the paintings in this series, he has painted the horses first in the studio, before returning to the track to paint the surrounding imagery: not an easy trick to pull off. These paintings are not photographic records: objects, people and horses may be moved or removed, space and perspective are often altered to create a 'greater sensation of deep space'. (4) The viewer is presented with an image that evokes a strong sense of place, rather than a 'photographic' record of the scene.

This sense of place is evident in both paintings. The distant hills in the landscape, 'the dreaming hills of Smeaton', are a geographically amazing and visually powerful feature of our region, echoing the curve of the track and surmounted by the high, pale blue skies of an early summer day. These works are not just portraits of a racetrack, they are sensitive evocations of the landscape, the weather and the air at a particular time of the year.

Empty racecourses play on the imagination. When there is no-one around it's the history and the aura of the track that's strong, and it also presents a space to imagine what might happen in the future. You might say that space relates to time. (5)